The whale always wins. They bomb down to the depths, while blasting the squid with sonar pulses. The whales know exactly where the squids are, and may have stunned them with sonar. (I’ve heard that getting sonared by a whale is like getting punched in the chest.) Recently, I’ve learned some cool facts about squid, thanks to documentary television and the internet. I assumed squid had suction cups, but didn’t realize that many varieties of squid have teeth around each sucker! I suppose that an exceptionally large squid might give the whale a fight, if it didn’t get chomped in the first attack. So, I drew a squid that’s almost as big as the whale. Another fact that I learned is that the Giant Squid has suckers and the Colossal Squid has two rows of HOOKS! That’s more like it.

A while back, I drew this with pen and a little acrylic wash of color. It was for the Monster Show.

On Friday, I drew this version with a Wacom tablet (digital drawing pen and tablet) in drawing software. The black line will be what I mask on the panel, so I can get crazy with the paint and pattern and still maintain a crisp illustrative edge. I added hooks and tried to make the squid more accurate in features. Both fighters were bulked up some and I tried to make the stare down a little more personal. I’ll be adding a horizon/shore line to the new piece. 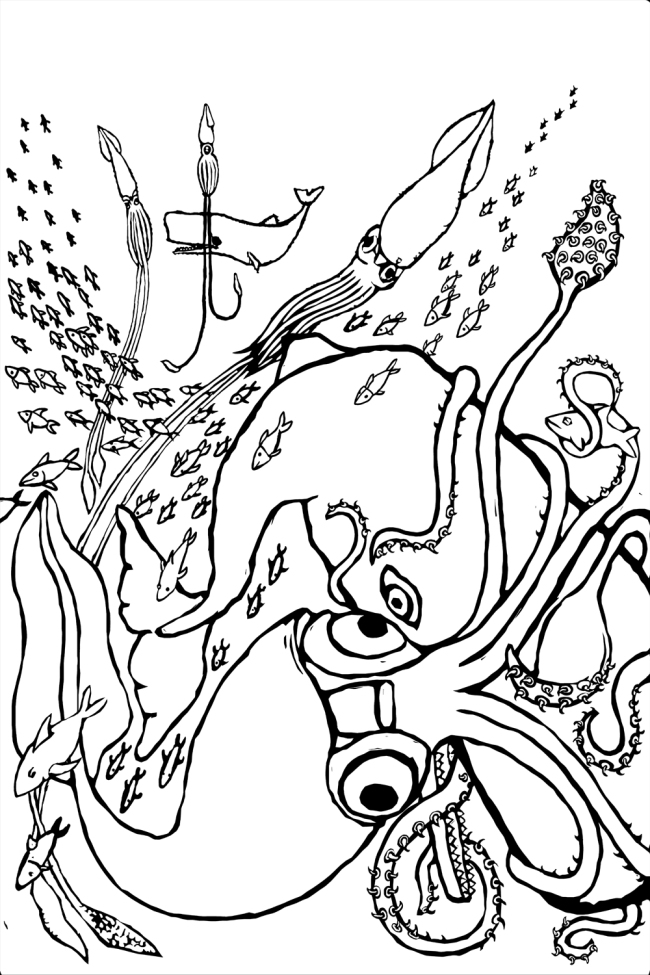 Sunday Jan 19. Today is a big day. I have the whole day set aside for painting. On Friday, I cut a lot of stencils out of paint masking adhesive vinyl. I also drew some new images and created some variants of existing designs. Yesterday, I had only enough studio time to apply the masking to two panels, then I had to pack up for the People Of People’s art show; I was the vinyl selector for the evening. Afterward, I was feeling chilled and achy, and have developed a cough – damn, I do not want to finish a show with the flu, so I skipped the after party and a concert I was going to see and drank sinus tea and slept early after reading a little.  Good job, responsible me. I think I’m feeling well enough to still make a good effort in the studio today.

Also, Here’s a simple variant of the volcanos (I like this spelling better, both volcanos and volcanoes seem to be acceptable). I added the city dome and kept the foreground empty. I think It will show off one of the more successful patina-woodgrain backgrounds.

This entry was posted on January 19, 2014 by artdamagedportland. It was filed under Uncategorized .