I’m excited to have a featured show at the The Goodfoot. Curated by Jason Brown (and Chris Haberman), it is one of my favorite art venues in Portland. I’ve been a fan of the Goodfoot Lounge since they opened ten years ago, enjoying the live music in what some have called “Portland’s Livingroom”. The upstairs, however, is a few years newer, more spacious with high ceilings, and ample wall space. The reputation as “an artist hang-out” seems appropriate; it’s definitely one of my hot-spots.

This show features Adam Sheppard, Johnny Tragedy, Tripper Dungan, and Joel Barber (That’s Me). Although, our themes and styles vary, we all sure like to use color! My contributions include my “Interface(redux)” series, which was finished moments before the show opened, and a recent series that I call “Just Add Water“. It’s satisfying for me to show these two series together, as they represent abstractions of two elemental subject matters: landscape and the figure.

This is a paragraph from the artist statement for the show:

Joel’s work has often paired mechanical techniques and graphic design style with painterly texture, and natural material such as woodgrain. The influence of pop culture, graffiti art, and graphic design affect his interpretations of traditional landscape and figure. Visually, Barber dwells in the area where there is an oscillation between the paint on the surface and the image contained within. 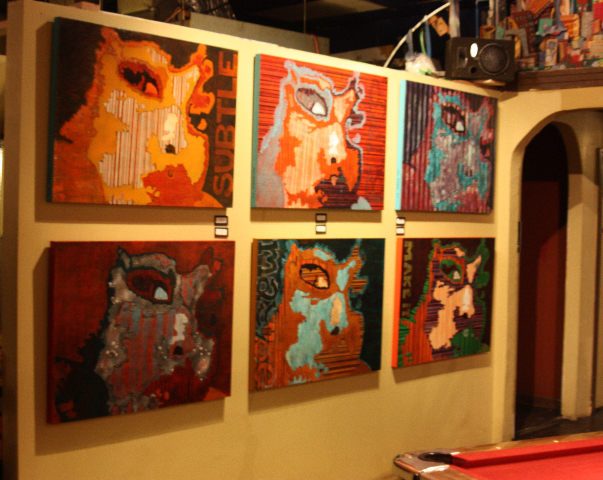